Hey, what's up? This is Jason. Now webinars come in a lot of shapes and sizes now. Used to be back in the day that webinars you would just basically plan an event and go to webinar, you'd write your copy and then you show up and present this thing live to your group of people. And it worked out great.

But now that everybody uses webinars, and webinars are capable of being automated, meaning they can play whenever, whether you're actually giving them or not. It has given rise to different webinar formats, different ways that you can use webinars as a content-based asset, as a sales asset as opposed to literally just having to show up and present this thing. Like in the insurance and financial planning space, they have to go and do lunches, they have to show up at lunch and give this presentation, and everything else.

Webinars in the olden days were similar. You had to show up and present this thing live. Then all of a sudden there were companies who would play this recording on Gotowebinar for you, so and then they would charge hourly for it. And then there was automated webinar software that would play the video at a certain time. Now there's still automated webinars software and there's still live webinars of course. There are times when you use those, but there's a third time, there's a third kind that we really use quite a bit, something that is just more on-demand. So in this video, we're going to walk through the three types of webinars, when we use them, why we use them, and what you can expect from them. And then we're going to come back and recap it. So I'll see ya in a minute.

Now when it comes to planning out webinars as I said, we're going to talk about this in a later module, but there are three different kinds of webinars that we run.

And you're going to see examples of these. There's the live webinar, of course. We don't build live webinars sales funnels because they're short term. But a lot of folks take the automated webinars that we put together for them and then run them live with affiliates.

So, but we don't write a webinar expressly for the purpose of delivering that webinar live. We write the webinar for the purpose of automating the webinar and then that copy, that presentation can be delivered live for an affiliate or if they're running a seasonal promotion or something like that. All the stuff we do is really about building automation.

So this can be... We've tested so many different timed webinars over the years, and what worked about three years ago was picking a couple of times throughout the day, and then having the webinar broadcast during those couple times. So you might pick one in the afternoon, six at night and nine at night, and then somebody can self select. Pick the time that they want to attend based on their schedule and then they would attend.

Then about two years ago, it switched. Automated webinars started becoming and just more generally accepted. And people knew that the webinars they were attending weren't necessarily live. So they started whenever they were posed with a question of what time do you want to start? They would just do none of them because they're like, "Well, I'll just come back to this page later when I decided I want to sign up for the webinar." And then they weren't coming back to the page.

What we ended up doing to combat that was the webinar registration would, it would start either every hour or every 15 minutes. We've done a lot of testing back and forth. And every 15 minutes seems to be the thing that converted the most visitors. So right now it is 11:17 a.m. here. And so the next webinar would actually start at 11:15, so I would be waiting eight minutes. I'd sign up for the webinar and then wait eight minutes for the webinar to start.

And what that did was it increased the webinar registration because people wouldn't leave.

So because somebody was only expected to wait for three minutes or seven minutes or twelve minutes or whatever, then they would just wait on the page and they would attend the webinar when the webinar went live. What we did was a live webinar registration has about a 30% attendance, a timed webinar if it was out into the future, like it's 11:00 now and if it was going to play at seven o'clock tonight, then the registration, then they attendance would be about 35 or 40%. if we scheduled it to start every 15 minutes, the attendance was closer to 50 to 55% so we're putting quite a lot more people on the webinar than we did if we timed it. So we just, we ran 15 webinars that started every 15 minutes for quite a while. And we still do.

You will see in a lot of the examples, we still have webinars that start every 15 minutes, but lately in the last six to nine months, what we found really working is just straight up on-demand webinars.

So rather than any timed it's, I mean it's kind of passé, but I mean really it's just a, it's a video lead magnet. It's not necessarily even a webinar. We still call it a webinar because it still needs to have that presentation feel to it, but now it's just an on-demand replay so it's an opt-in page and then a webinar register, or a webinar room page, which doubles as the webinar replay page basically. It has an appearing button, the whole thing. And you'll see some of those. But so we've kind of moved through the gamut.

Live webinars still work if you have an audience that you're presenting to or if an affiliate is sending you an audience. Timed webinars starting every 15 minutes should be used and tested with webinars that start immediately like just an on-demand webinar. And the reason being is because your prospects are busy.

A lot of it depends on your target market, your customer avatar.

But if you're targeting really busy people, business owners, doctors, chiropractors, contractors any kind of blue-collar worker, heaters, plumbers, HVAC folks, then a lot of times you're going to get better results if you provide that instant replay because they don't have to sit around and wait. Because I mean you tell those kinds of people to wait for seven minutes, they're just not going to do it. They might send it to their system, but that's probably, they're probably not going to, they're probably just going to leave and be like, "Ah, whatever. I'll check out the replay later." And then they don't ever do that.

So catching them immediately with an instant replay is a good idea. So it's just one of the things that we look at when building these sales funnels, and we'll talk more about that when we get into the [inaudible 00:07:31] webinar sales funnel build.

All right, so those three webinars really depend on what your offer is.

So if you would like to learn more about putting together these webinars in your business and building webinar sales funnels that are automated and there are marketing automation and people basically just come in, they listen to your presentation, they attend your webinar and then they either book a call with you or they buy from you, click here to book a 1-on-1 Action Plan Call and we will talk about architecting one of these automated webinars sales funnels for you. 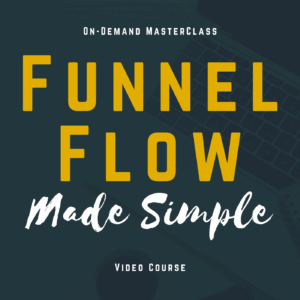